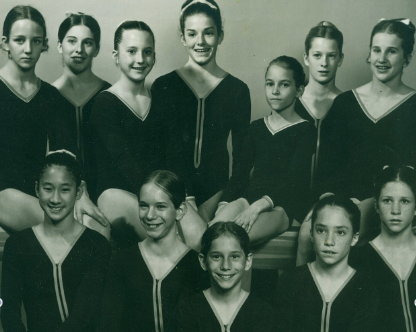 Diablo Gymnastics began as a small program sponsored by the Pleasant Hill Park and Recreation Department in 1966. When founder Jim Gault’s gymnasts outgrew the limitation of rented space at College Park High School, he moved us to an empty Safeway building on Oak Park Boulevard. That gym location is memorable because we had to choreograph the tumbling passes in our floor routines around the vertical beams that held up the roof – they were in the floor area!

Diablo’s next move was into an old feed warehouse on Boulevard Way in Walnut Creek, and then around the corner to a bigger space across from a mortuary on Saranap Avenue. As his program began to make an impact nationally, Mr. Gault quit his day job teaching at College Park to devote himself full time to training gymnasts. During this period, Diablo team members traveled extensively, competing in France, Japan, Germany, South Africa, England, Australia, Zimbabwe, Canada, Israel, and Venezuela.

In 1978, Diablo Gymnastics became the first tenant in a warehouse complex on Old Crow Canyon Road in San Ramon, where we remain to this day. We’ve grown from two hundred students to more than a thousand each week.

Diablo Gymnastics is open Monday through Saturday, with the exception of specific holidays. See full calendar for closures.